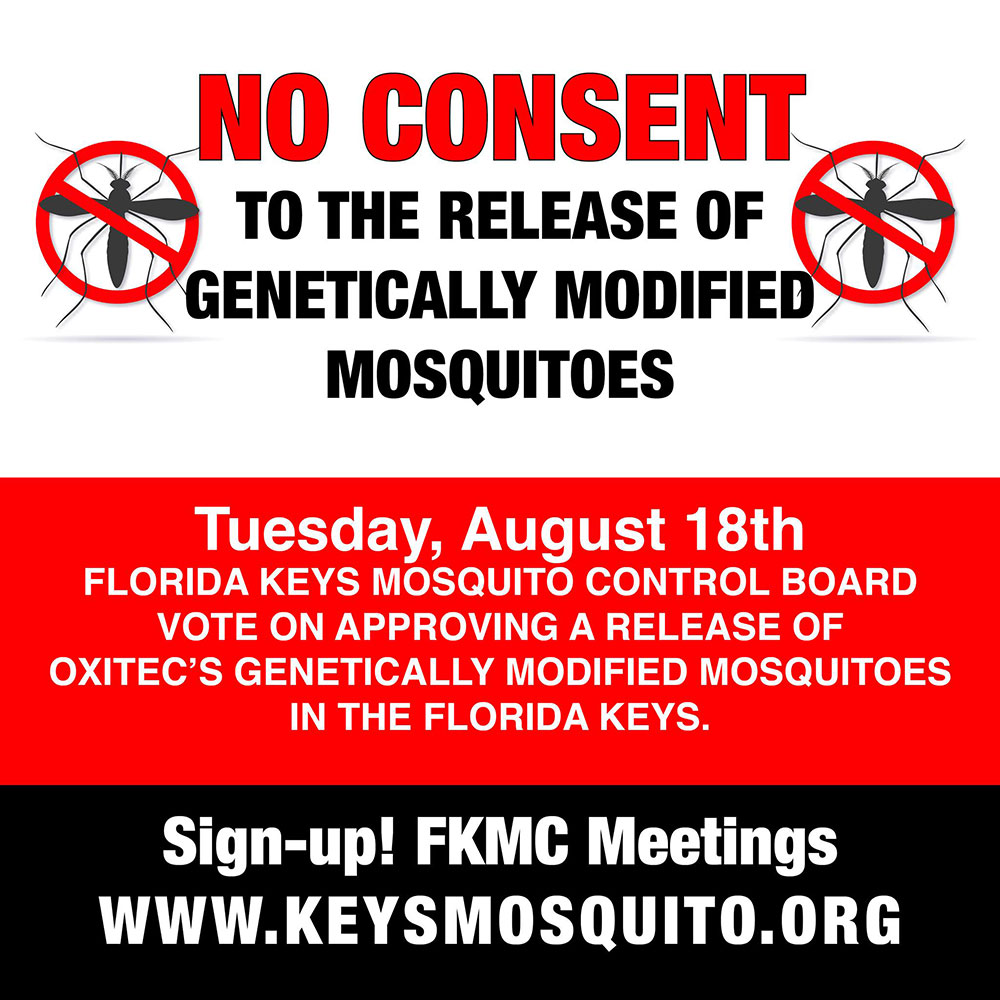 Tell FKMC what you think about the FIRST release EVER in FL of GMO Mosquitoes! (with sequences of herpes and Ecoli)
Tuesday, August 18th Florida Keys Mosquito Control board will VOTE on approving a release of Oxitec’s genetically modified mosquitoes in the Florida Keys.

If you want to support a “NO!” Vote of FKMC Commissioners on this risky technology, please contact Chrissy Bloxom at cbloxom@keysmosquito.org, and register to speak at this critical meeting.
We hope to have a minimum of 80 speakers with 3-minute (individual) or 5-minute (organization) comments. This will go on public record to show that we will not tolerate being used by a multinational biotechnology corporation for garnering baseline data to develop their patented, for-profit technology at the risk of public health and the environment.

Meeting details may be found HERE:
Attached is a briefing document created by our partners at Friends of the Earth if you are interested. Click Here
Please share this with friends, business leaders, media contacts. If you are not already aware, a billboard representative of opposition to this experiment is erected at the entrance to the Florida Keys, inbound US1-South in Key Largo, image attached. Should you wish to make a contribution and “own” a piece of the billboard, and learn more about our position, please visit:

www.stopgmm.com
Thank you all for expressing interest and engagement in this ongoing battle to protect what we love. Sign up to speak! 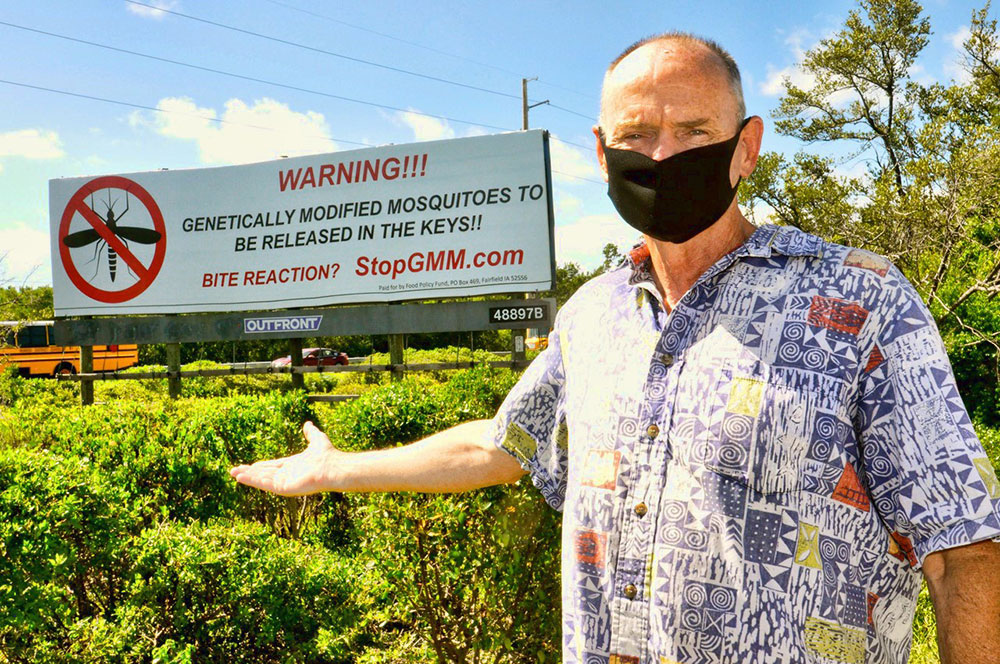 Key Largo, FL — Today a large billboard warns residents and visitors “Genetically Modified Mosquitoes to be released in the Keys.” The South-bound traffic facing sign, located at mile marker 94, reflects the growing opposition to the pending decision about the release of millions of Genetically Modified Mosquitoes (GMMs) in Monroe County, Florida. The Florida Keys Mosquito Control District is expected to vote on the release tomorrow afternoon, July 21, 2020, at its public meeting. Public comments will be heard at 5pm EST. If approved, it would give a green light for Monroe County (The Florida Keys) to be the first location GMMs will be released in the U.S.

In a public webinar, presented by independent scientists critical of the potential release, presenters highlighted the lack of regulations, standards, and the lack of transparency. In addition, public health risks have never been considered, such as antibiotic resistance and the inadequacy of testing done to see how the modified mosquitoes will impact not only our local and regional ecosystems, but human health as well.

“Do we really want to be the home of the genetically modified mosquito experiment? At a time when we are already battling one public health pandemic, we should not be experimenting on the environment or the public’s health, and must stop any experimenting that could cause another devastating impact on our local economy. We need solutions that are supported by sound science, transparency, and which are going to be sustainable for both our fragile and unique ecosystems, our economy, and least risky for people. The community does not consent to being lab rats in this experiment,” said Barry Wray, the Executive Director for the Florida Keys Environmental Coalition. The group has opposed the GMM technology and served as the tip of the spear for a global coalition of science-based groups and individuals opposed to the release of this technology in the Keys and throughout the U.S.

The EPA first rejected the release of these experimental mosquitoes, and then replaced all knowledgeable personnel and approved GM mosquitoes with new personnel for environmental release in Monroe County, Florida and Harris County, Texas on May 1, 2020. In its review, the new EPA review team failed to evaluate key issues surrounding the releases, including safety to human health, potential for the experimental mosquitoes to move out of testing areas, and the unintended release of biting female mosquitoes.

Although documents submitted by British company Oxitec, owned by venture capital firm Third Security, LLC, claim that they will not release female mosquitoes, a recent study from the Powell Lab at Yale University found that the GM female mosquitoes were not sterile as Oxitec claimed, and that the offspring of the company’s genetically modified mosquitoes survived into adulthood. The study also raised major concerns that GM mosquitoes could create hybrid wild mosquitoes, which may worsen the spread of disease and be more resistant to insecticides than the original wild mosquitoes. In the wake of Powell’s discoveries, Oxitec has publicly contradicted their previous claims, admitting females were released and hybrid species are expected. Oxitec must return to the EPA for a review of these new admissions.

Recent trials in the Cayman resulted in the rejection of the Oxitec technology and 128 pages of emails
released from Chief Scientist, Dr. Allan Wheeler, for the Cayman Mosquito Research and Control Unit (MRCU), who oversaw the testing. The emails exposed the numerous misrepresentation and scientific performance issues experienced during the trial. Oxitec has never addressed the conflict or disparity of their performance claims, versus the actual data collected.

The Florida Keys Mosquito Control District is expected to vote on the rejection or approval of Oxitec’s proposed genetically modified mosquito field trial on Tuesday, July 21, at 5pm EST. The public may offer public comments during the meeting via the agency’s website. 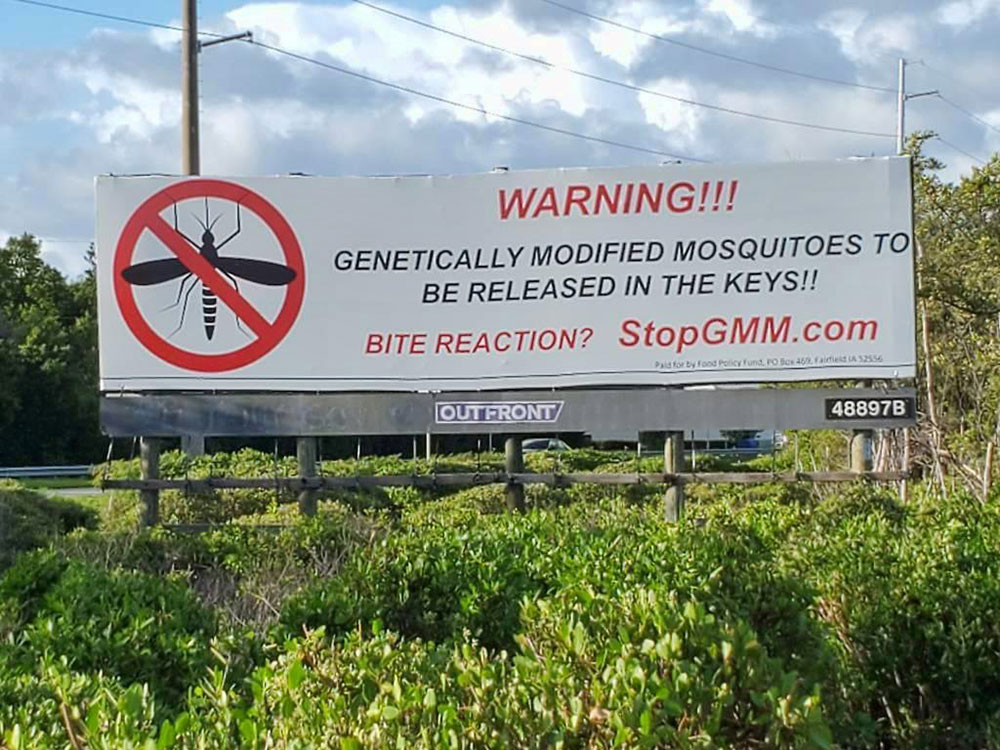 GMO Free USA/Toxin Free USA and GMO Free Florida are a national and FL specific 501(c)(3) nonprofit advocating for a clean, healthy food system and educating consumers about the hazards of GMOs, synthetic pesticides and other toxins.