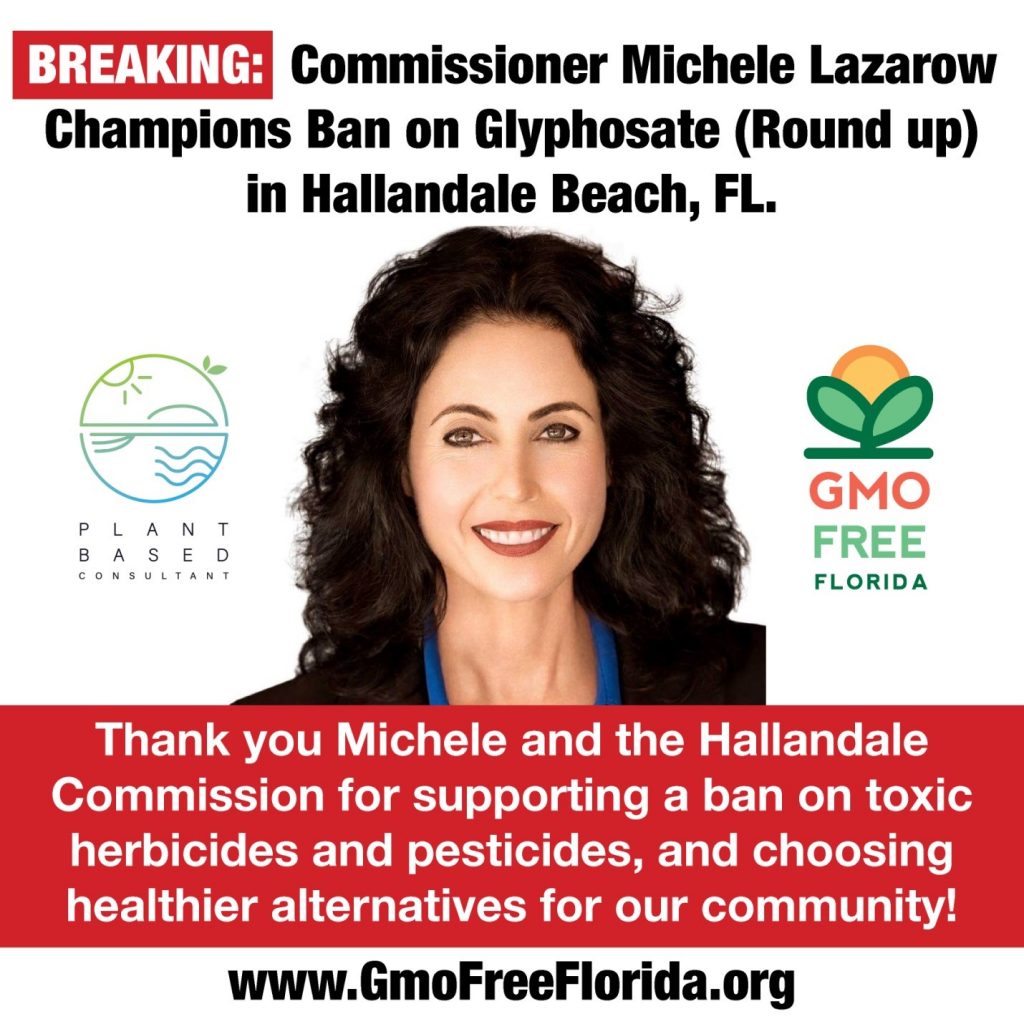 In light of the Dewayne Johnson (Monsanto Cancer Trial) The IARC and the W.H.O., citing Glyphosate is a probable human carcinogen, and because glyphosate contributes to feeding red tides and cyanobacteria, the City of Hallandale Beach recognize a potential public health threat and will persue non-toxic alternatives to protect its citizens. (See below studies, links and info)

“We are especially grateful to Commissioner Lazarow for her constant effort and support of labeling GMOs, banning antibiotics in livestock, banning puppy mills and most recently, her support for the use of alternatives instead of harmful pesticides, herbicides & glyphosate. –The volunteers of GMO Free Florida”

Consumers are asking for safer alternatives. Today we have a long list of scientific studies showing long-term risks to public health and the environment from the over usage of glyphosate. A special thanks to Plant Based Consultant for taking on this endeavor Bound by Beauty and Pesticide Free Miami for their resolutions in North Miami and Miami Beach.

If you’d like to hear more about viable alternatives to glyphosate that are non-toxic Reach out to Howard Vlieger at studentofthesoil@gmail.com

STUDIES: Part 1.
Glyphosate is the active chemical ingredient in Monsanto’s Roundup; a broad spectrum nutrient and mineral chelator; an endocrine and hormone disruptor; a patented antibiotic that is sprayed on GMO food crops; used as a ripening/drying agent on non-organic crops such as wheat, legumes, sugar, nuts, seeds; sprayed on lawns, sidewalks, children’s parks and schools; and is found in our waterways, rainwater, soil & air.

Deemed by The W.H.O as a “Probable Human Carcinogen” and most recently, “Roundup causes Liver Disease in Low Doses” there are hundreds of studies that show harm from glyphosate. It is important to practice Precautionary Principle. There is no acceptable level of glyphosate in our bodies or the environment and for this reason we are calling for a moratorium on glyphosate in the State of Florida. Glyphosate is found in over 750 products and around 650 million tons have been used in 2013 alone.

Glyphosate based herbicides are the most widely used in the world and their use has increased exponentially over the last 20 years (Benbrook 2016).
In March, 2015, The International Agency for Research on Cancer (IARC), the specialized cancer agency of the World Health Organization (WHO) concluded that there is sufficient evidence of glyphosate’s carcinogenicity in experimental animals and classified glyphosate as probably carcinogenic to humans. (The International Agency for Research on Cancer 2015)

Studies suggest glyphosate based herbicides at realistic doses may be an endocrine disruptor (Thongprakaisang 2013, Gasnier 2009) which may reduce testosterone levels (Clair 2012, Abarikwu 2015), impair sperm quality (Abarikwu 2015), or could cause disturbances in the reproductive development of experimental animals when the exposure was performed during puberty (Romano 2010) which may occur in humans as well.

According to The President’s Cancer Panel:
It is vitally important to recognize that children are far more susceptible to damage from environmental carcinogens and endocrine-disrupting compounds than adults. To the extent possible, parents and child care providers should choose foods, house and garden products, play spaces, toys, medicines, and medical tests that will minimize children’s exposure to toxics. Ideally, both women and men should avoid exposure to endocrine-disrupting chemicals and known or suspected carcinogens prior to a child’s conception and throughout pregnancy and early life, when risk of damage is greatest (The President’s Cancer Panel 2010).

Since glyphosate and its metabolites have been detected in air, rain, and water (Majewski 2007, Battaglin 2014), and may be sprayed in parks or schools where children will be exposed, it is virtually impossible to minimize children’s exposure to these toxins.

Therefore, we call on legislators in Florida to take the precautionary principle to impose a moratorium on glyphosate based herbicides used in Florida to protect our children and prevent our people, pets, wildlife and endangered species from being exposed and our waterways and ecosystems from being contaminated. Glyphosate is a probable endocrine disruptor and probable human carcinogen that has already been banned in many Cities, Counties and Countries around the world.

The International Agency for Research on Cancer (2015) IARC Monographs Volume 112: evaluation of five organophosphate insecticides and herbicides. http://www.iarc.fr/…/me…/iarcnews/pdf/MonographVolume112.pdf and http://monographs.iarc.fr/…/Monographs/vol112/mono112-02.pdf

Glyphosate should be banned to reduce harmful cyanobacterial blooms and red tides.

Glyphosate is the “so-called” active chemical ingredient in Roundup herbicide as well as many other name brand glyphosate-based weedkillers. Glyphosate based herbicides are the most widely used in the world and glyphosate use has increased almost 15-fold in the last 20 years.(Benbrook 2016) Glyphosate is a phosphonate-based herbicide which requires phosphate mining.(Dissent 2017) The process by which glyphosate is made has led to a superfund site due to radioactive waste materials, groundwater pollution and mercury emissions.(Dissent 2017) Glyphosate is a broad spectrum nutrient and mineral chelator(Johal 2009); an endocrine and hormone disruptor(Gasnier 2009, Myers 2016); a patented antibiotic((United States Patent 7,771,736) that is sprayed on GMO food crops; used as a ripening/drying agent on non-organic crops such as wheat, legumes, sugar, nuts, seeds; sprayed on lawns, sidewalks, children’s parks and schools; and is found in our waterways, rainwater, soil & air.(Majewski 2014, Battaglin 2014)

Trichodesmium is saltwater cyanobacteria found in the Gulf of Mexico and can sometimes be found in the Atlantic Ocean off the coast of Florida. Trichodesmium fixes nitrogen so it provides nutrients that increases the growth of Karenia brevis which is responsible for red tides.(Mulholland 2006) Like Microcystis aeruginosa, Trichodesmium also uses glyphosate as a source of phosphorus.(Dyhrman 2006) Therefore, the use of glyphosate by Trichodesmium can lead to saltwater cyanobacterial blooms which leads to an increase in nitrogen which then causes Karenia brevis blooms which leads to red tides.

Like Microcystis aeruginosa, studies have also reported exposure to glyphosate-based herbicides can cause kidney and liver damage including the potential for non-alcoholic fatty liver disease, in some cases at glyphosate levels as low as .05 parts per billion. (Abarikwu 2015, Benedetti 2004, Seralini 2014, Mesnage 2015, Mesnage 2017). Glyphosate-based herbicides have also been linked to cancer. The International Agency for Research on Cancer (IARC), the specialized cancer agency of the World Health Organization (WHO), concluded that there is sufficient evidence of glyphosate’s carcinogenicity in experimental animals and classified glyphosate as probably carcinogenic to humans (International Agency for Research on Cancer 2015). A jury in U.S. federal court in California delivered a $289 million verdict against Monsanto, the primary manufacturer of glyphosate-based herbicides, on behalf of a school groundskeeper who developed non-Hodgkins lymphoma after repeated exposure to Monsanto’s Roundup herbicide. The verdict stated Monsanto acted with malice failing to warn of the risk of developing non-Hodgkin’s lymphoma, a form of cancer, from exposure to glyphosate. Currently about 8,700 other people diagnosed with Non-Hodgkin’s Lymphoma after being exposed to a glyphosate-based herbicide are also suing Monsanto. (CBS/AP 2018, Marketwatch 9/5/2018)

Glyphosate exposure may also reduce testosterone levels (Clair 2012, Abarikwu 2015), impair sperm quality (Abarikwu 2015, Owagboriaye 2017), or cause disturbances in the reproductive development when exposed during puberty (Romano 2010). Along with an increase in glyphosate use there has been a 500% average increase in the level of glyphosate found in human urine. (Mills 2017) One study found higher urinary glyphosate levels in pregnant women was associated with a shortened gestational length which is associated with a reduction in lifetime cognitive achievement (Parvez 2018). Another study observed humans that were chronically ill had significantly higher glyphosate residues in their urine than their healthy counterparts (Kruger 2014).

Mechanical methods for above ground use would include flame weeding, steam weeding and foam weeding. Also rotary cultivators work as does a basic scuffle hoe. Chemical methods include the use of vinegar for certain plants.(Moms Across America 2018)

Alternative methods to the use of glyphosate-based herbicides for reducing weeds in a water body depend on the conditions. If the weeds are above the surface of the water control could be accomplished with mechanical, biological, chemical and physical methods. Mechanical methods could include the use of small cutting boats. Although these cutting boats are initially expensive, in the long-term these boats are often more cost effective than glyphosate-based herbicides. Glyphosate based herbicides must be applied several times per month depending on the conditions. Over time this continuous use of glyphosate based herbicides leads to herbicide tolerant weeds meaning larger and larger doses must be used to kill weeds,and as previously mentioned this could increase the amount of harmful cyanobacteria in waterways.

In comparison cutting boats function like lawnmowers where weeds never become immune to being cut and would not increase cyanobacteria. A local Florida company selling small cutting boats would be Weedoo Greenboat( https://www.weedooboats.com/ ). Less expensive weed cutters can be attached to already existing boats such as the Aquatic Mower( www.aquaticmowers.com ). Also, dock or frame-based weed cutters can be used such as the Lake Groomer( https://www.lakegroomer.net/ ).

Biological methods would depend on the type of weeds growing in the water body. Depending on the weeds this could include stocking the pond with plant-eating fish such as triploid grass carp. Chemical methods would also depend on the species of weeds in the water body. Species such as Hydrilla verticillata, Stuckenia pectinatus, and Spartina alterniﬂora can be controlled with vinegar(4%-20% acetic acid) based herbicides(Anderson 2007). The EPA allows vinegar(up to 8% acetic acid) to be added to a formulation as an “inert ingredient”(EPA 2016). Even if a 20% acetic acid solution were used there is a part of federal law which states that if a product clearly has uses other than as a herbicide and no claims about that product having herbicidal uses are made, it does not have to be registered. Acetic acid has numerous other uses so it falls under this category. The MSDS for vinegar at 7% acetic acid indicates LD50(oral,rat) = 47286 mg/kg.(MSDS Vinegar) In comparison the World Health Organizations indicates for glyphosate LD50(oral,rat) = 4230 mg/kg(World Health Organization 2004). Therefore, vinegar is far less acutely toxic than glyphosate and homeowners would be very happy to know that vinegar(at 7% acetic acid) is >10 times less acutely toxic than glyphosate. Even at 20% acetic acid the MSDS indicates Acute Oral LD50 (Rat): >5,000 mg/kg
(MSDS Horticultural Vinegar) which is still not as acutely toxic as glyphosate. However, this still does not take into consideration that in most cases pure glyphosate is not used and formulations, such as Roundup, which include glyphosate as the active ingredient tend to be more toxic than glyphosate by itself.(Mesnage 2014, Benachour 2008) Also, this does not consider the toxicity of AMPA(aminomethyl-phosphonic acid), a metabolite of glyphosate, which is considered even more toxic than glyphosate.(Benachour 2008)

If the weeds are below the surface of the water, permanent control of weeds can be achieved with barriers. These function by blocking light to the plants, stopping photosynthesis, killing the weeds. These include examples such as LakeMat Pro( https://www.lakemat.com/lakemat-pro/ ) which float above the surface of the water, or Lake Bottom Blanket( http://lakebottomblanket.com ) which float above the benthos layer of the lake. This can provide permanent weed control for smaller water bodies.

Stop using glyphosate-based herbicides and urge your neighbors, friends and relatives to do so as well. Contact your city council members and ask them to ban or severely restrict glyphosate use on city-owned properties. This can be done by adopting a resolution similar to North Miami.(North Miami 2018) Contact local stores that sell glyphosate-based herbicides such as Lowes and Home Depot and urge them to stop selling it. Buy organic food which does not allow glyphosate to be used.

Florida Fish and Wildlife Conservation Commission (2015) Annual Report of Pollutant Discharges to the Surface Waters of the State From the Application of Pesticides. https://plants.ifas.ufl.edu/wp-conte…/…/files/npdes-2015.pdf

Florida Fish and Wildlife Conservation Commission (2016) Annual Report of Pollutant Discharges to the Surface Waters of the State From the Application of Pesticides. https://plants.ifas.ufl.edu/wp-content/…/files/npdes2016.pdf

World Health Organization (2004) The WHO recommended classification of pesticides by hazard and guidelines to classification : 2004 http://www.who.int/…/publicatio…/pesticides_hazard_rev_3.pdf